It's a wonderful sunny and breezy day today, so I've decided to write about my unique experience during last Easter Holiday. ^_^

Since I've just bought 'something' before Easter, I was practically broke. So, I've decided that I will only travel to places that are cheap and no currency exchange involved. Which is nowhere else other than, CZECH REPUBLIC!

Did you know, there are loooottttssss of wonderful places in Czech? Also, there several places which have been listed as UNESCO World Heritage. Yes, SEVERAL.

I've always wanted to go to Adrspach Skaly since my 2nd year of study here. It's a very beautiful place with lots of nature wonders. Indeed, it is also used to be the filming set of the famous NARNIA. And I've always planned to go here many times but unfortunately, I've never got the chance.

Too bad either, it was not my rezeki yet to go there on last Easter Holiday. (As my friends said, maybe Allah wants me to go on a beautiful day since the day that I was supposed to go is freaking cold and freezing. Maybe next time, Fathin. ^^) But, still I am jealous with them who already went there. Hahaha.

Anyyywaaayyyyyy, this post is supposed to be about Kutna Hora. So, back to the main story.


So, we (me, Hasniza, Cikmik, Dalila, Anis, and Kak Fara) decided on the night before that we are going to Kutna Hora since we the adik2 (Because ada Kak Fara, LOL) have never been there before.

Kutna Hora is also listed as the UNESCO World Heritage. Why? You'll find out later when you read my entire post.

Gearing up early in the morning, we've prepared breakfast and lunch (jimat habis! kan dah kata sudah tak ada duit...hehe) and boarding on the train at 8.37am. The place was not really far from Hradec Kralove. It was just about an hour journey with two short transits at Pardubice and Kolin.


We arrived at Kutna Hora main station around 10 am. After asking the information center, off we go to the first and the most important spot in Kutna Hora, Kostnice. 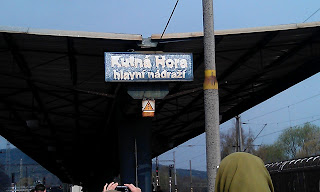 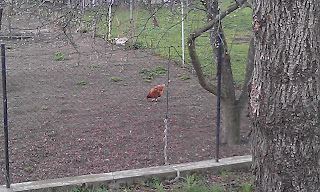 But before we arrived at Kostnice, we've came across a huuugggeeee Easter Market! There are almost everything. We checked out some stuffs first and decided to buy what we want at the end of our trip.

So, we continued our journey to Kostnice and in a few minutes we were already there! (It is a small town indeed)

What it is actually Kostnice?

Yes, it is a sanctuary full of human bones! Adult bones, baby bones, injured bones and whatever kind of bones (pelvis, humerus, fibula, tibia, coccyx, etc...you name it) are here. Kost in czech means bones. So, Kostnice literally means something like "Bony place". It is a two-storey chapel surrounded by graveyard with Kostnice at the ground floor and the real chapel at the upper floor.

It was told that the bones here were from 40,000 dead people. Most of them were massacred during several wars including the Hussite wars. This ossuary (sanctuary is for human in the graves, ossuary literally means sanctuary for bones of the dead.) is said to be built during the Gothic area. Some people called this as an art, and some believes it is sort of purification of the dead, hence the sculptures of bones were built. However, the truth is not really known to us.

As for me, I wasn't really fascinated by the bony view of this place. It is the best place if you want to revise your anatomy (Believe me, our anatomy lecturer did mentioned about this place). But for me, to go inside once is enough already. It's not that I'm scared of the bones because I've been dealing with them for few years, but the atmosphere and how do they've dealt with these bones still made me feel uncomfortable somehow.

I guess that's it for now. I'll tell more later about our trip in the next post.

Next: The silver mine.