I.love.flowers.
I know, I know.....entah apa-apa je statement ni. It's been a long time since I've shared my new interest and hobbies....or have I? (tiba-tiba rasa macam tak pernah share pun...hahaha)
Since my first year, I've started to have a great fond of flowers. I do like fresh flowers which the one that we bought and put in the vase filled with water. I often stop by the florist shop just to admire the flowers displayed. Maybe because here is a European country, so my favourite flower, the roses, are so abundant (and much cheaper too!!) that I can't take my eyes off them. (Blame the tropical country that I came from where a stalk of rose costs about RM2 and above in KL. Hahaha =p)
But, since I was living in the hostel at that time with limited free spaces on my study table to place the bouquet, I had to put aside that thought, and bought a flower pot instead. Which I put it on the balcony.
Then, when I started to move into our new flat in Eliščíno Nábřezí, I have a new bigger study table! But still, I don't know why but I feel like I shouldn't buy the fresh flowers since it will die anyway. So, I still opt for the flower pot. Only this time, much bigger (and still much cheaper! ^_^)
Then, then, then.......finally!
This year, I've been told that the supermarket (Albert and Tesco) are selling variety of fresh flowers (daisies, roses, carnations, lilies....and the list goes on) on a much cheaper basis!
And my adik-adik who shared the same interest with me, had already went to get their flowers!
And the rest is history. 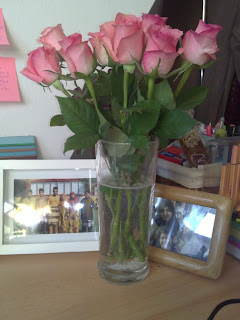 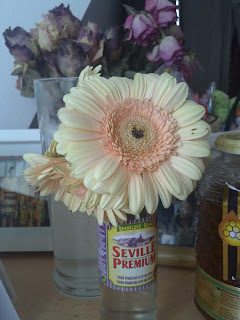 and since that time, I've started to receive flowers on my birthday! (hehee...aren't my friends lovely? Alhamdulillah ya Allah for granting me such good friends!)

These are the only ones that I managed to snap the pics. But I'm definitely love all the flowers that were given to me! Alhamdulillah....thanks everyone! ^_^
and just recently, I've found a new flower stall which sells 1 flower (not rose, it's a dahlia species i think.) for 3 kc each!!! (equals to RM 0.50) So, now as there's a chance of saving more money, this is my new spot!!
But now, as the summer has drawn its curtain and autumn is slowly coming in.....so my (cheap) fresh flowers supplies seems to be gradually bidding their goodbyes as well. Not that the florist here won't be selling any flowers during this upcoming winter, but for a cheaper bargain (especially for roses, as it's peak season is summer) like this summer, is hardly going to happen.
Oh well, till we meet again my flowers next summer! ^_^
Don't you think that flowers are among the beautiful creations of Him? SubhanAllah!!!
Salam a Na Shle!
Email Post
Labels: life my loves